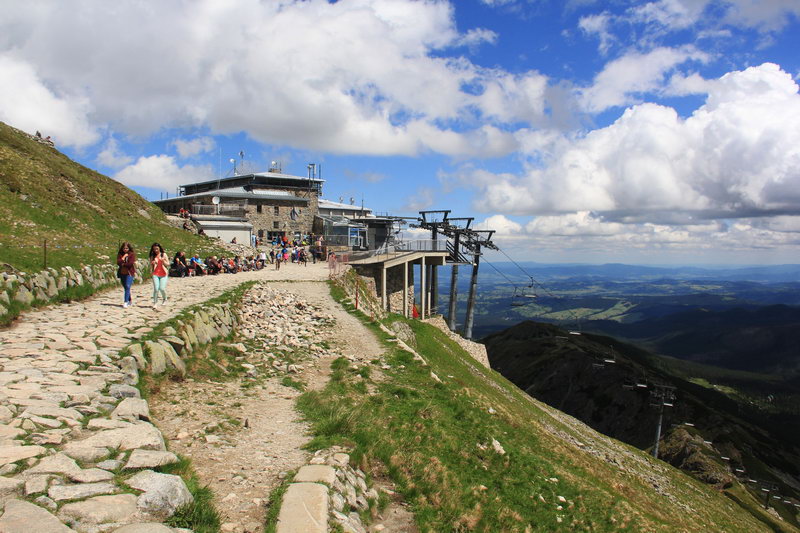 So it happens that this weekend we were in the Tatras mountains - in fact it was a meeting for training, before climbing Lenin Peak.

And additionally friends from different countries decided to walk around the beautiful places.
Thus Eagle Path (Orla Perc, eagle trail, etc.) was selected - a mountain hiking route in the Tatras Mountains in Poland, Malopolska region. It is considered the most difficult and dangerous path for all Tatras. It is said that, since its creation on the trail, more than 120 people died. Here is an adventure that we chose for Saturday. 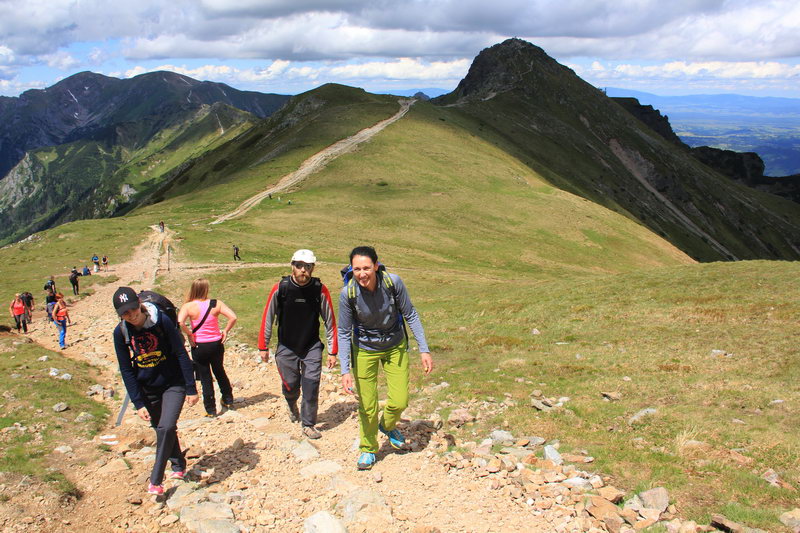 In common case the route starts from the pass Zavrat, but it still needs to get there somehow. At first we are going to climb through skhronisk Murovanenets, but it is 3 or even 4 hours to go. Why we need to waste time, it's better to have a look at the mountains top. And it was decided to go on the lift to Kasprowy Wierch, and then go through Svinitsa by foot.

Kuznica - in the distance we see the entrance to the lift and long queue before the entrance to the lift station. Somehow we do not think about it. If you want to go to Kasprowy Wierch by lift in the summer season, you should buy tickets in advance. Here is the official website www.kasprowywierch.biz. But now there is an information that in July and August, if you buy tickets online, they are 1.5 times more expensive than on the spot.

So 1.5 hours in the queue passed in conversations, and here we are in the cabin lift. Lift with change. We move to another booth, a few minutes and we are at the top.

There are a lot of people. Somebody is walking, somebody is taking pictures ... 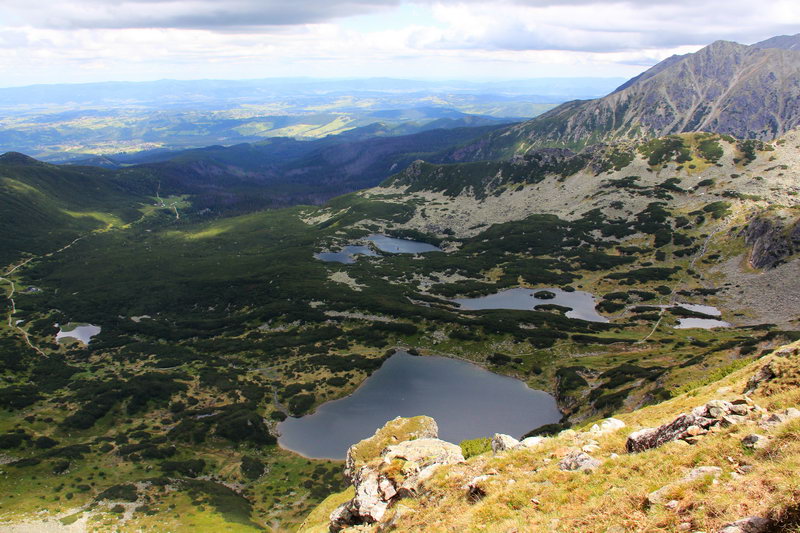 Without time wasting, we're going in the direction of Svinitsa. There are many directions but we should go ahead. There are crowds of people, I remember when we were here in May, there was no other people except us. And now  avenue in rush hour.

The ascent to Svinitsa is not very complicated and not very interesting, but lacks spectacular views. This time the lake has melted and dark blue color stands out against the green background. 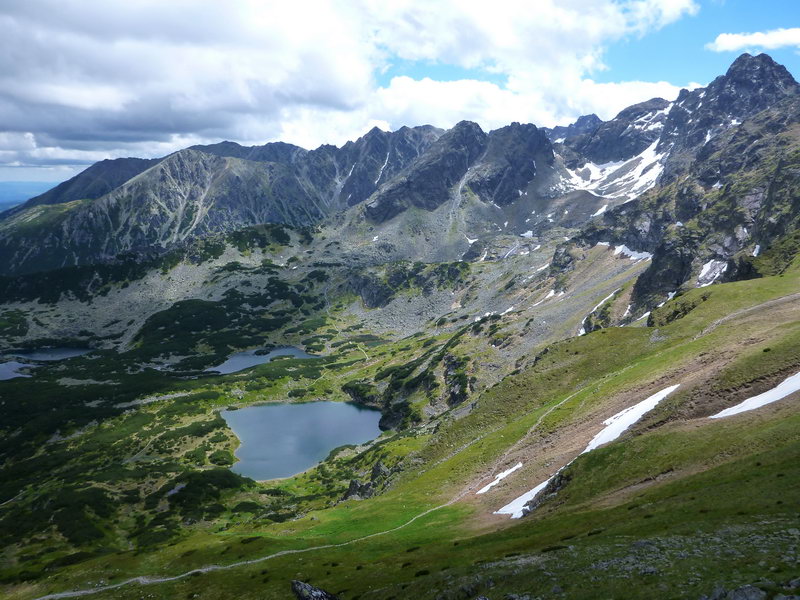 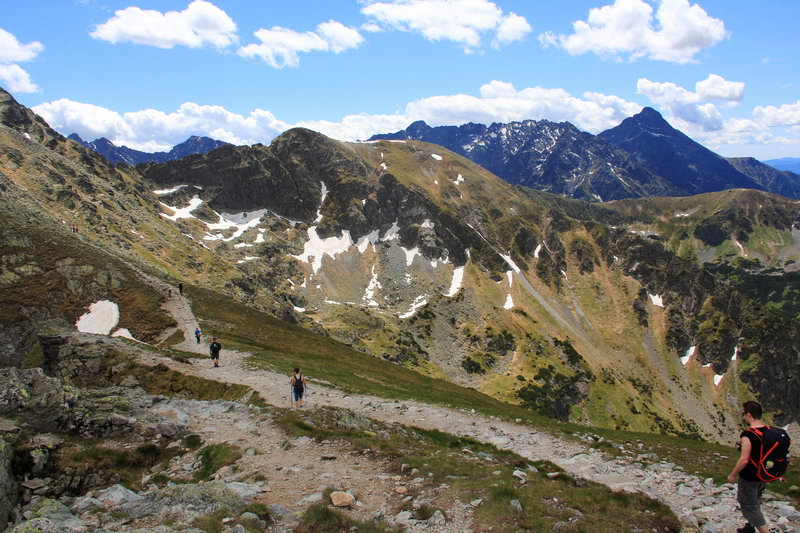 We spent not to much time to reach the top of Svinitsa. But with all of our transfers to Zakopane, where the lift starts, standing in a queue, hiking to the summit we were on Svinitsa only at 13. Time for lunch, and we spent it with the benefit of facilitating our backpacks.

Still about 40-60 minutes it took for us to go to the pass Zavrat, the main thing that reduce our speed was a large number of people, when in some areas queues on both sides. Some of these queues can be bypassed and simply, just do not use the chain, but the part in the narrow passes, you can not. And it is very slow.

From the pass Zavrat one way route begins. Somewhere in 2006-2007, it was decided that the most difficult part from Zavrat to the Top Koziy Wierch should be one-way. Often this rule ia violated, but we have not seen these. 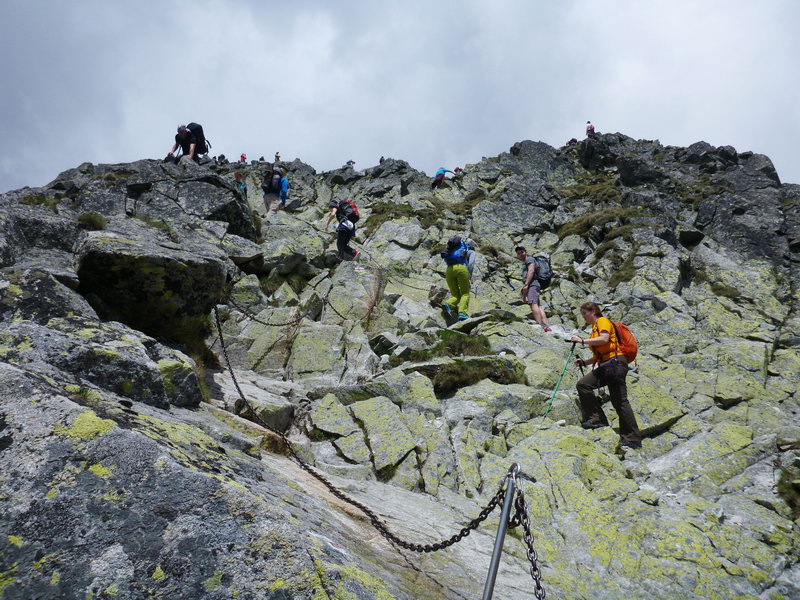 Map says that to the top of Koziy Wierch is 2 hours and 15 minutes of the hiking. It looks that it really takes this time, but we are not particularly looked at the clock.

Already the end of June, and now there is almost no snow, but sometimes you can meet a large snowdrift. Thus, in one place, where the trail descends slightly and then continues to traverse the slope it was a large section of snow. Chains were under the snow. The man in front of us use his crampons. We got 20 meters of rope hung for insurance and walked holding on to the rope. Next two groupes asked us to use our rope, but others had their own, and we were finally able to move on. 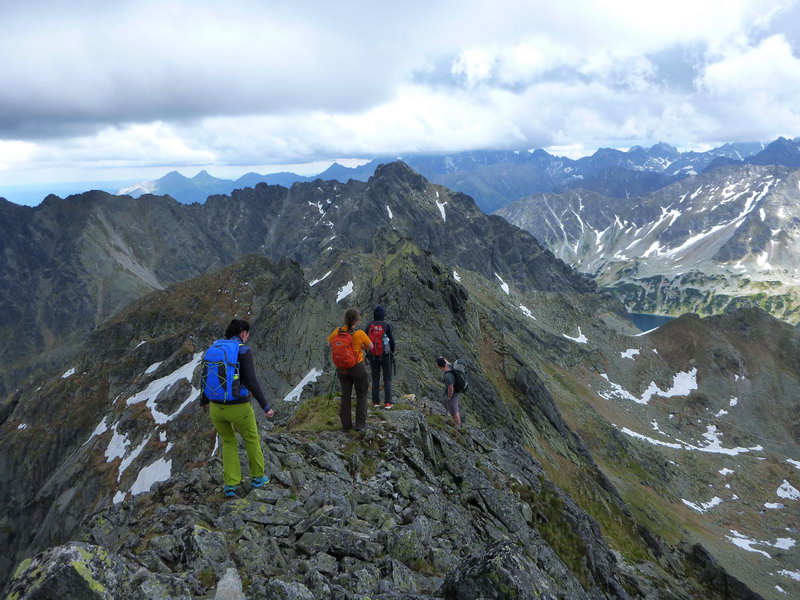 On the entire route you can find quite a lot of safety chains, shackles on particularly smooth rocks, and even a couple of stairs.

Often there are places where you would like to stick to, but there is nothing for it. There are passages of the sharp scallops with cliffs on both sides, there are ascents descents on a flat plate inclined, and if the rocks are wet or you have slippery shoes, it is better not to go there. 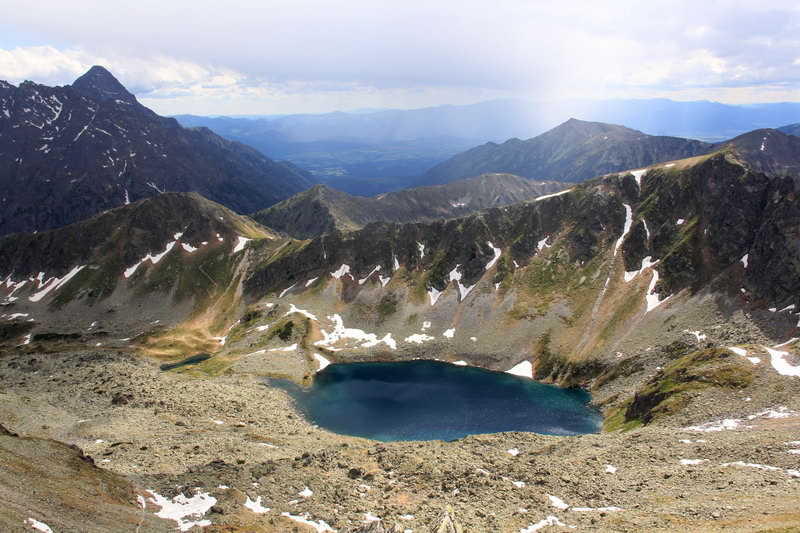 Among us, Elizabeth has quite a lot of experience passing via-ferrata routes and she told me that in the normal via ferrata routes there is a wire that goes through the entire route, so you absolutely always connected to this rope ... Orla Perc really can not be called via-ferrata, because the possibility of safe access is not everywhere. I found that they wanted to make a real Via Feratta, but decided not to spoil the historic route. 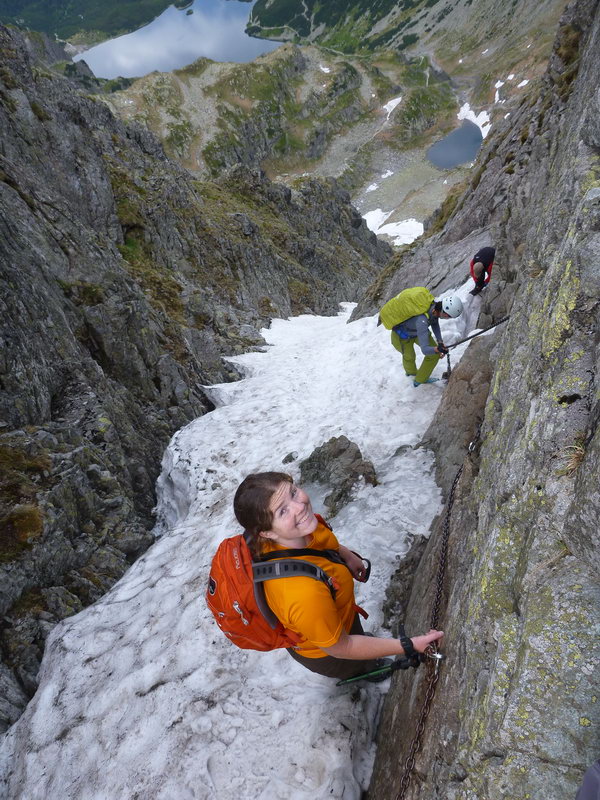 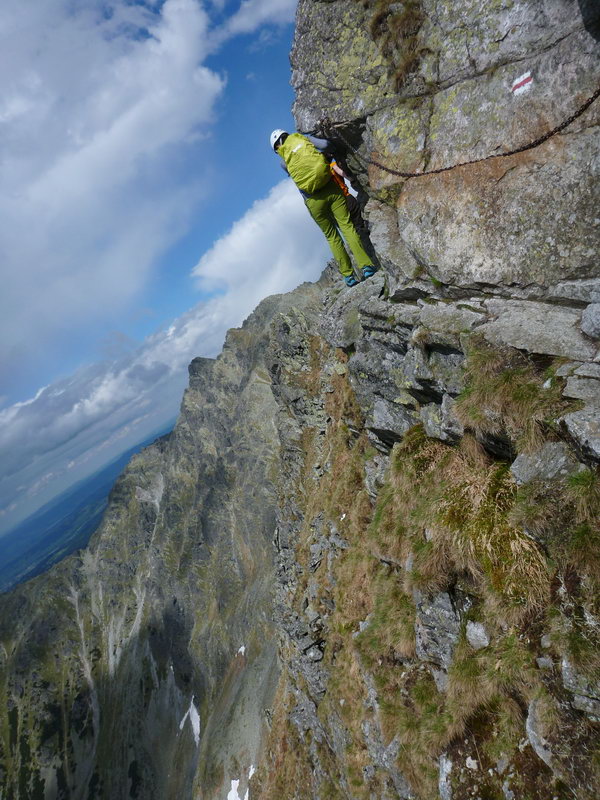 In general, when we climbed to the top of Koziy Wierch it is time to decide to stay on the route or go down. Evening was comming and although it will be dark at 10pm, but we still had to go down and get to the hostel booked in Zakopane. Thinking about time that we need and after weighing all the pros and cons, we decided to go down to the valley Five Polish Lakes (Pyati Stawow POlskich) and try not be late on the last bus at 21 to Zakopane. 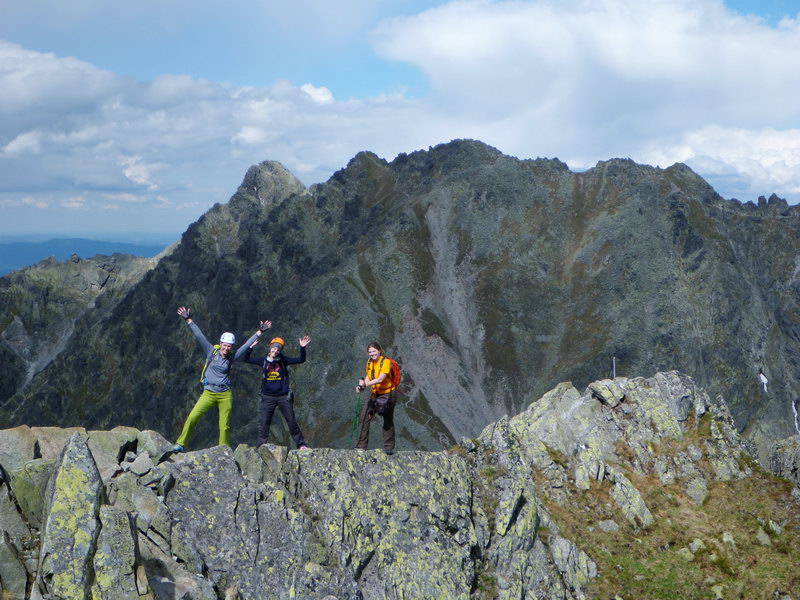 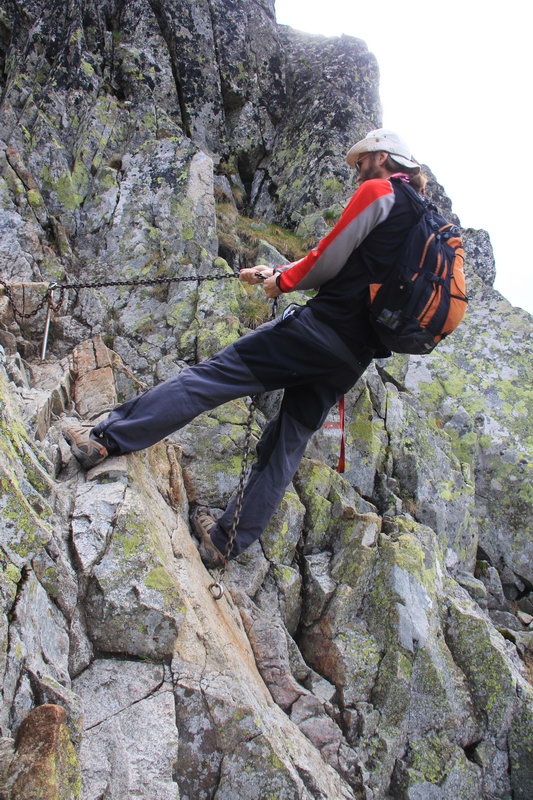 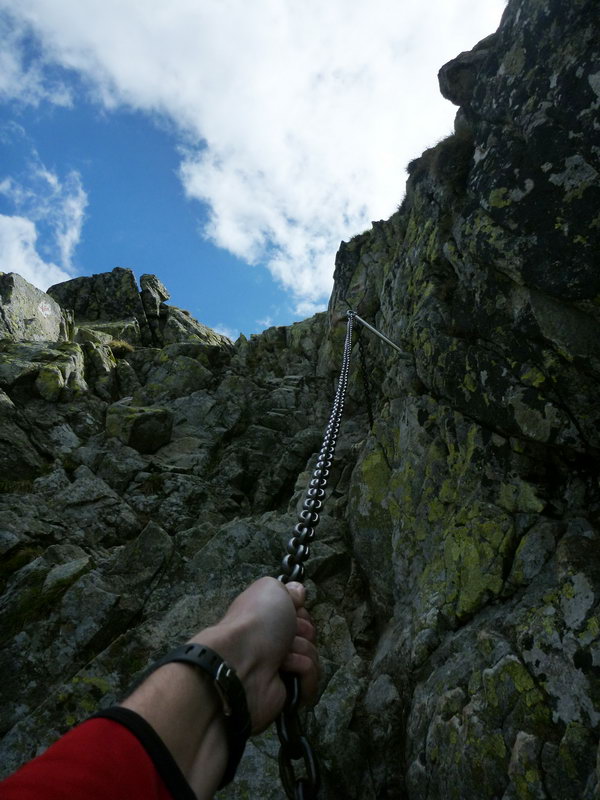 I would say that for the route Orla Perc one of the main constraints are the long ways to the start and pretty long routes to the outputs.

Even with spending the night in skhronisk (like Murowanec) go to route and exit from it will take 1.5-2 hours. And this is a 3-4 hours of light time. So even in summer you need to leave very early, and in the off-season you need to think about, and is it worth? And if there is, then think carefully outfit, approaches and possible exits from the route. 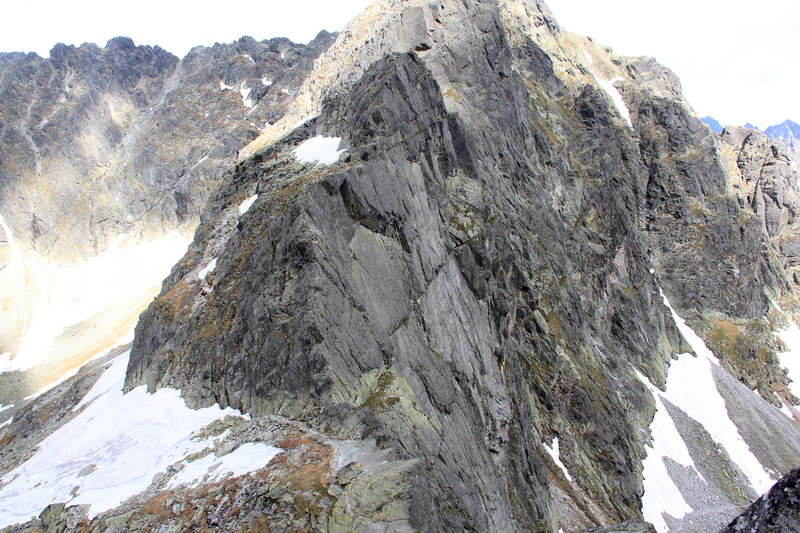 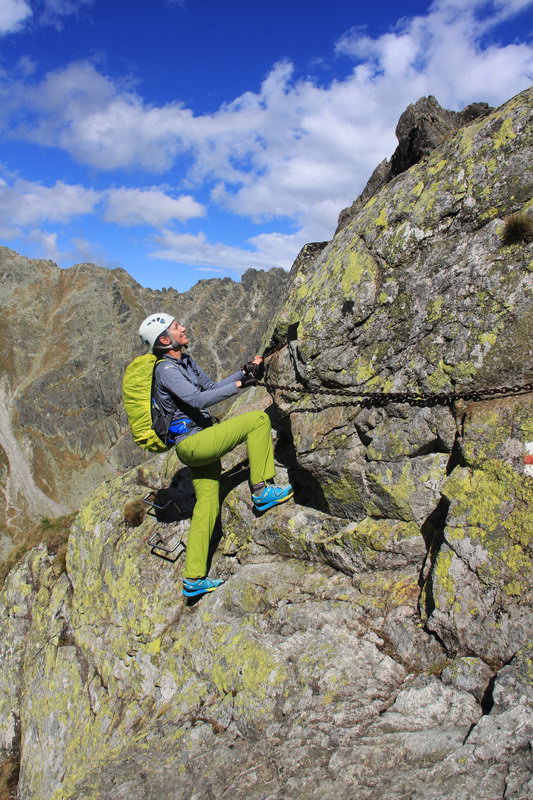 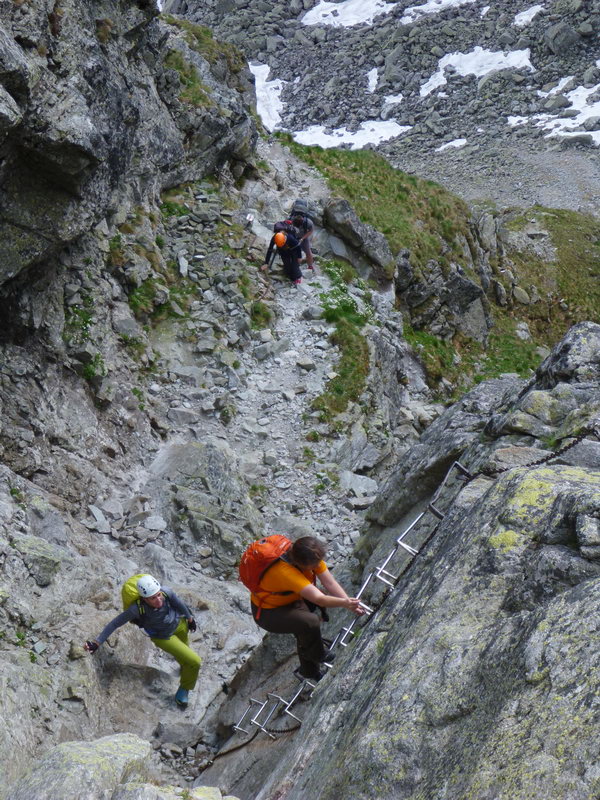 On the route there are several places where you can potentially place a tent and spend the night, but ... it is not allowed. It is said that there are cameras on the route, and if they see that you want to stay overnight, then turn on the siren and people will come (Yaroslav experience, people is not reached him, but there was a siren). 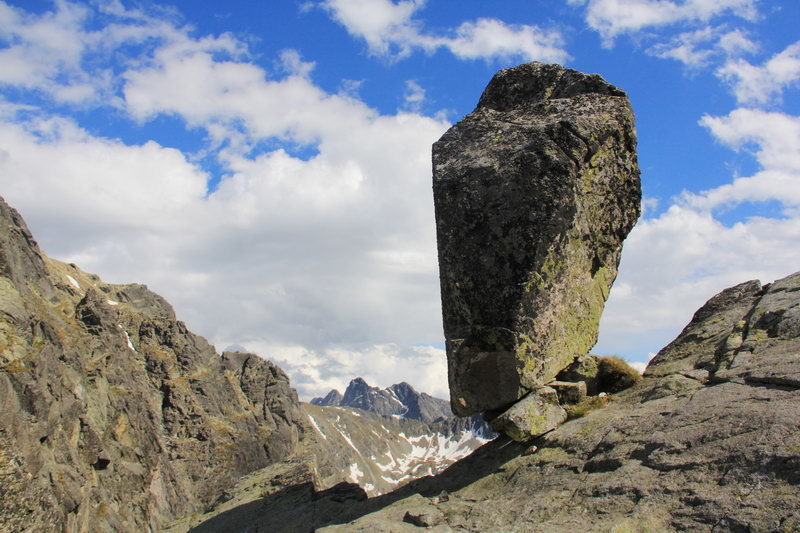 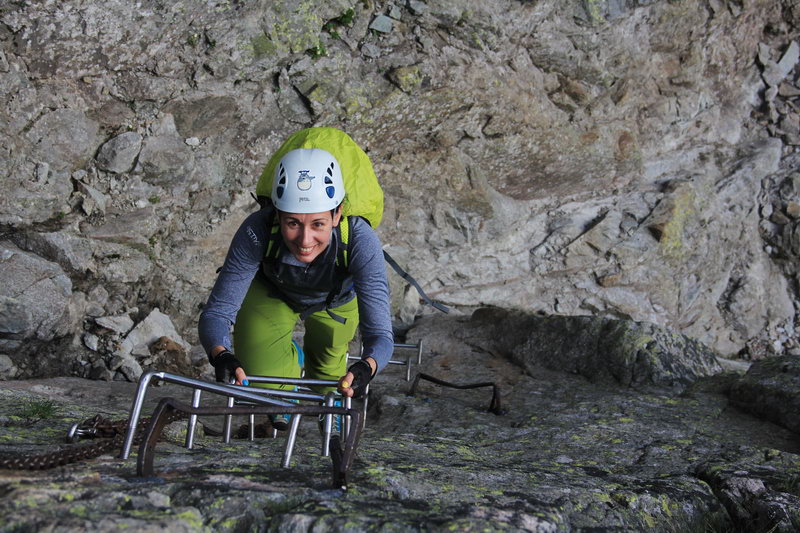 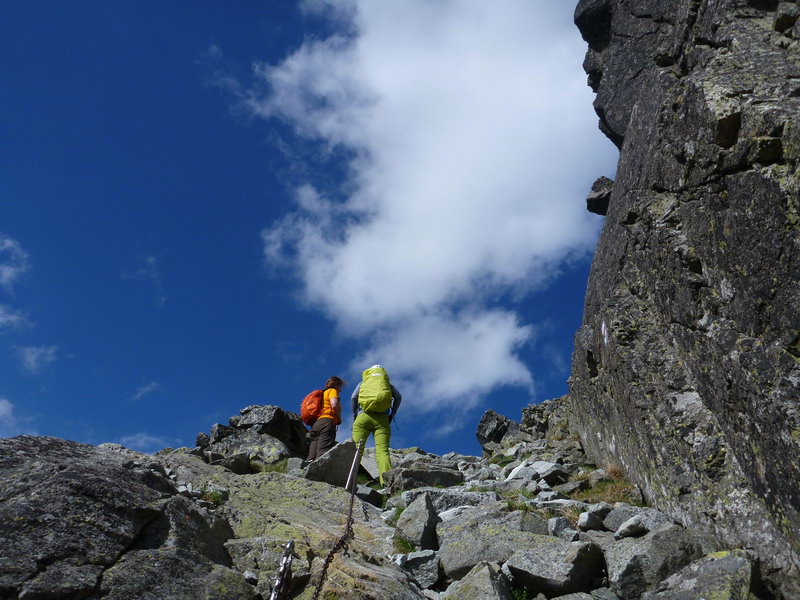 The trail is located in the center of the High Tatras. The total length of the trail is about 4.5 km. The total time of passage (in summer, depending on the road conditions) varies from 6 to 8 hours (but largely depends on your physical fitness and the number of people on the route). The highest point is the top of Koziy Wierch with 2291 meters above sea level.

The trail starts at the pass Zavrat (2159 m) and ends at the pass Kzhyzhne (2112 m); It leads through several peaks and traverses the other. The route is very dangerous and runs mainly along the ridge. Many aids are available for tourists on the steepest and vertical parts, including ladders, staples and chains. The most common ground is mostly granite slabs, gravel and uneven surfaces. The route is connected with other routes; There are eight intersections leading to the mountain shelters. Part from the pass Zavrat to the Koziy Wierch is one-way. Along the route are possible rockfalls and avalanches. 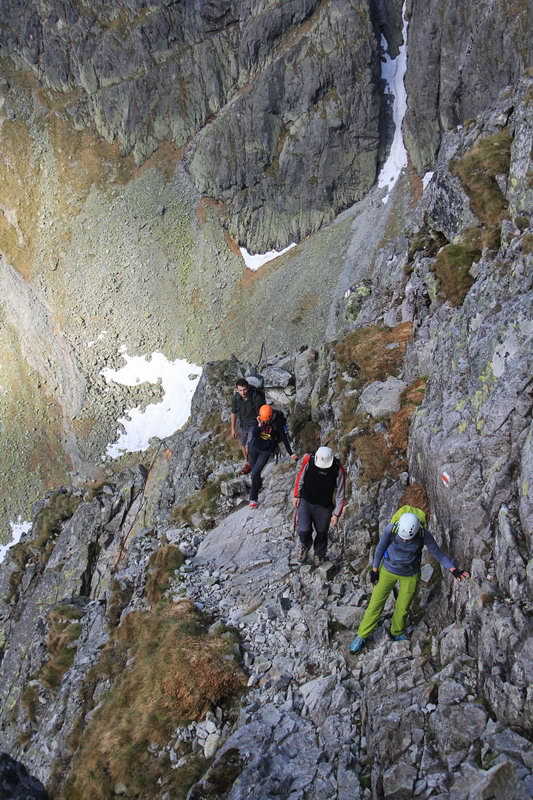 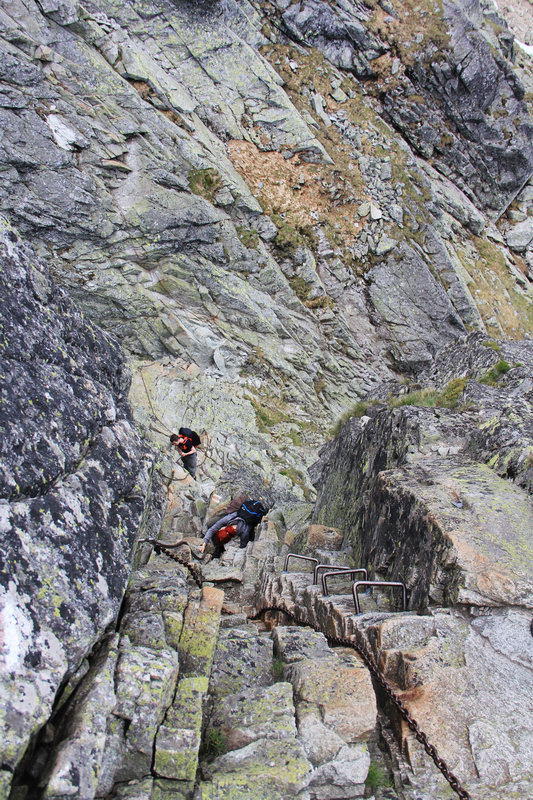 How to get to the route:

From the Valley of the Five Polish lakes: 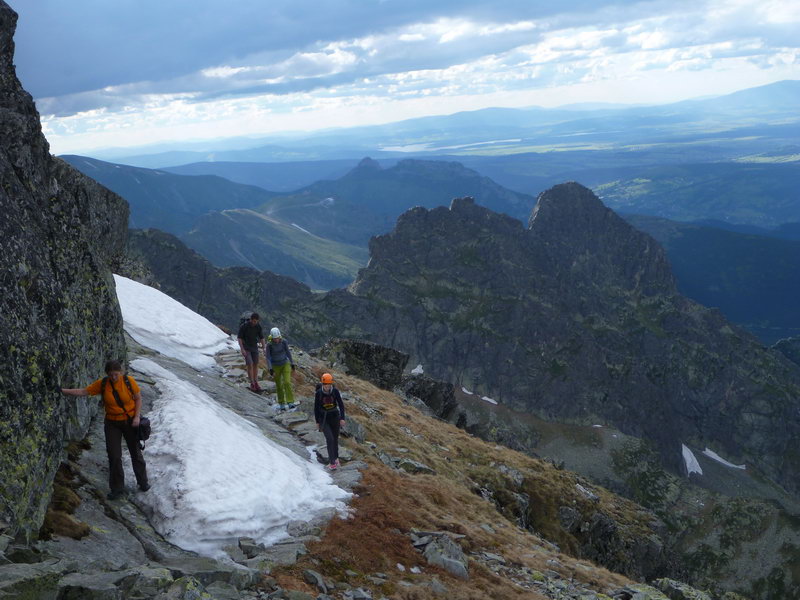 I think that we will return to the route Orla Perc, to go through the whole thing, and it can be not only once 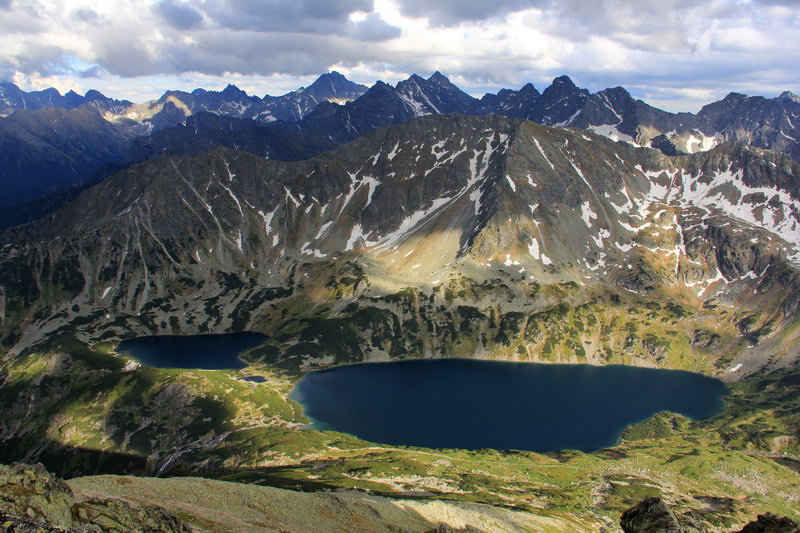