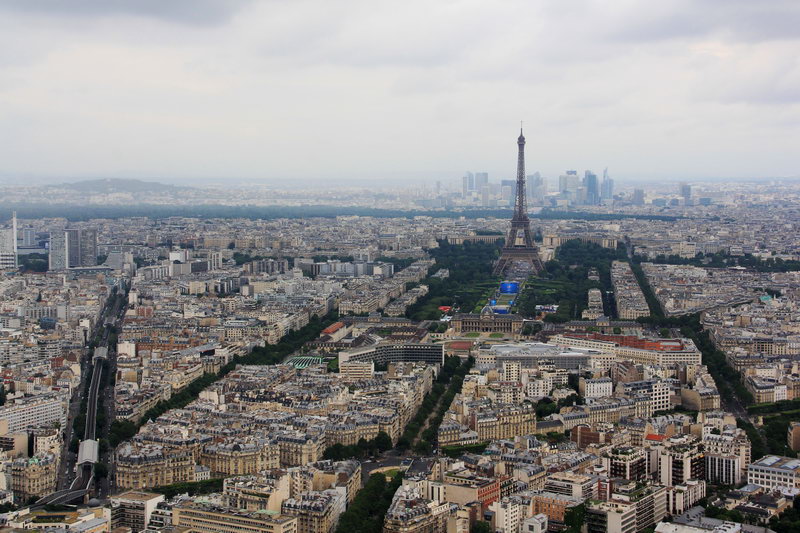 So we decided to use airbnb and it was great. The apartment was very small, but very cozy, located right in the center in the minute availability from the Luxembourg Gardens and close to Notre Dame de Paris. We arrived late Friday night, but access from Charles de Gaulle airport to the city is easy, and you can find more detail in the article "How to get from the airport to Paris." We arrived and went to bed.

In the morning we were ready to conquer Paris. Preliminary plan of sightseeing was made in advance. Getting around Paris is better to plan in advance, unless you do not have a lot of time. Majority of places of interest are situated no more than 500-700 meters from each other, so we decided not to use public transport and go almost everywhere on foot. But if you still want to use public transport, or will live far from the center, you will find some tips at the end of this article.

We start from the Luxembourg Gardens. In the garden we saw the Luxembourg Palace - one of the best architectural monuments throughout France. Before the palace is a huge beautiful fountain. But this time it did not work for some reason. 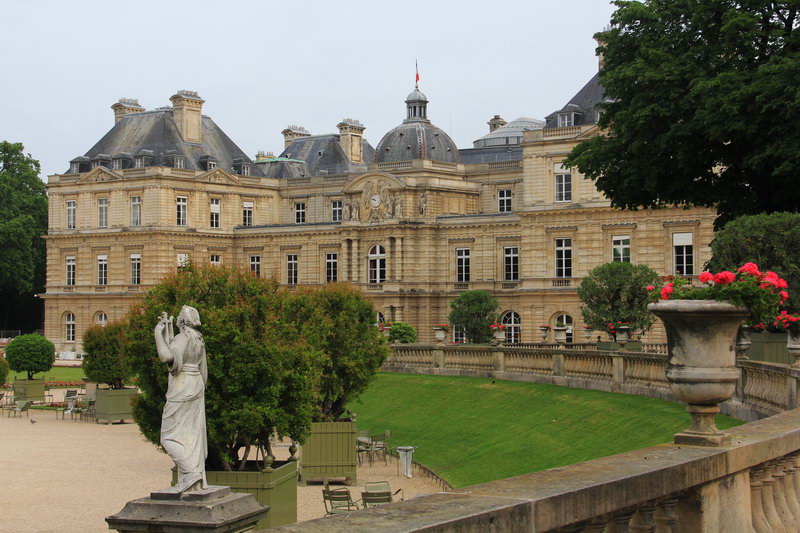 By the way, the name "Latin" it received, as it is located near the Sorbonne, where Latin language was taught and many students who lived nearby were able to talk using Latin.

Also Sorbonne building located in the Latin Quarter. Sorbonne is the center of the University of Paris, the architectural and historical monument in the heart of France. The history of the construction dates back to the 13th century, when the first University of Paris was formed. Today, the Sorbonne attracts tourists from all over the world for its history, and students who want to study in one of the world's best institutions. 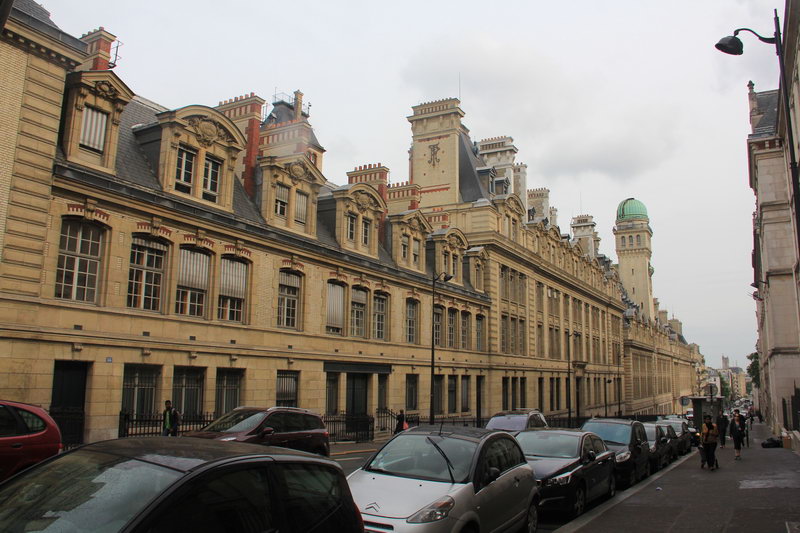 Not far from the Sorbonne, there is the impressive building of the Pantheon. In 1764 the building of the Pantheon was conceived by Louis XV as the Church of St. Genevieve, by which he, with the help of prayer, has recovered from a serious illness. However, after some time the story has made its own adjustments. French revolutionaries turned the church into the tomb to the great men of the country. 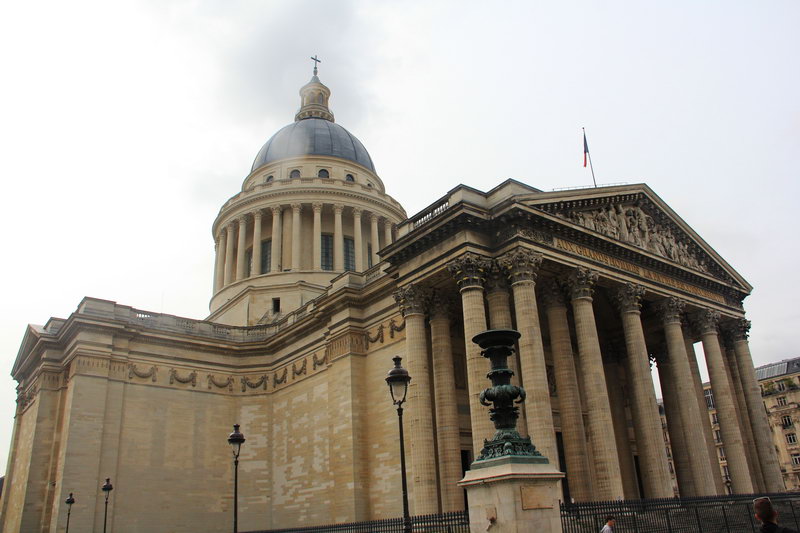 From the Pantheon and the Sorbonne, we went to the island of Cité, where the famous Cathedral of Notre-Dame de Paris is placed.

Entrance to the Cathedral of Notre Dame de Paris is free, but the queue is long, and all the time someone comes up to the line somewhere in the middle. But standing for long time is not necessary, all goes quickly, but if you suddenly will fall in back of the group with large backpacks, you will have to wait for their inspection. 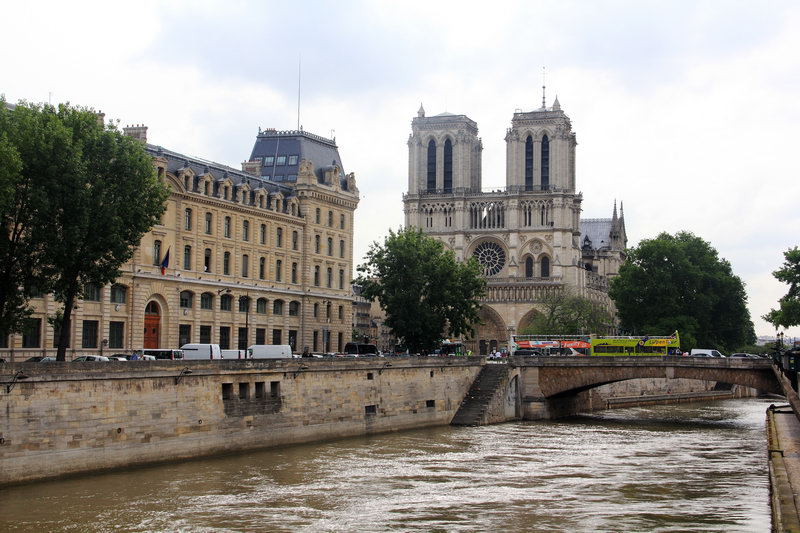 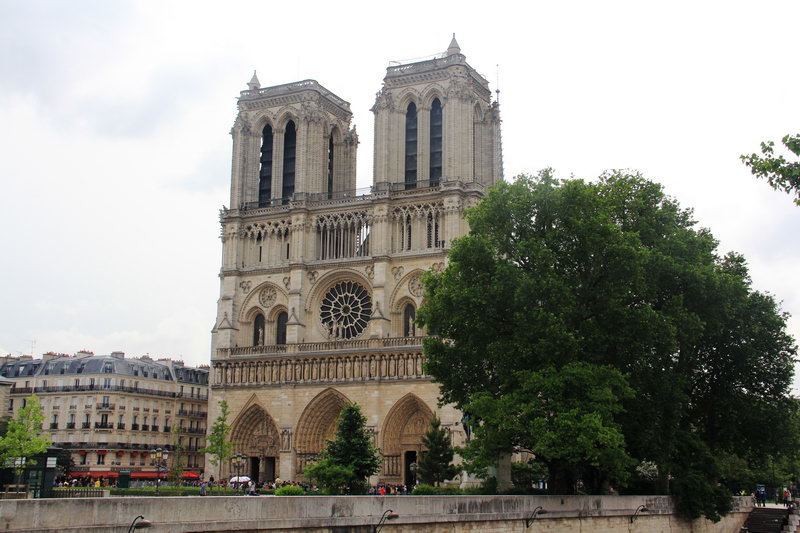 Although the entrance is free, but if you want to go to the treasury or to the tower, you will have to pay. Entrance to the treasury will cost 5 euros, but if you want to climb the tower you should pay 10 euros and use another queue. We decided that in Paris many other lookouts and even higher and did not go to the tower. But we went inside of Notre-Dame de Paris. It is certainly a big and beautiful, but it didn't make a big impression on me... 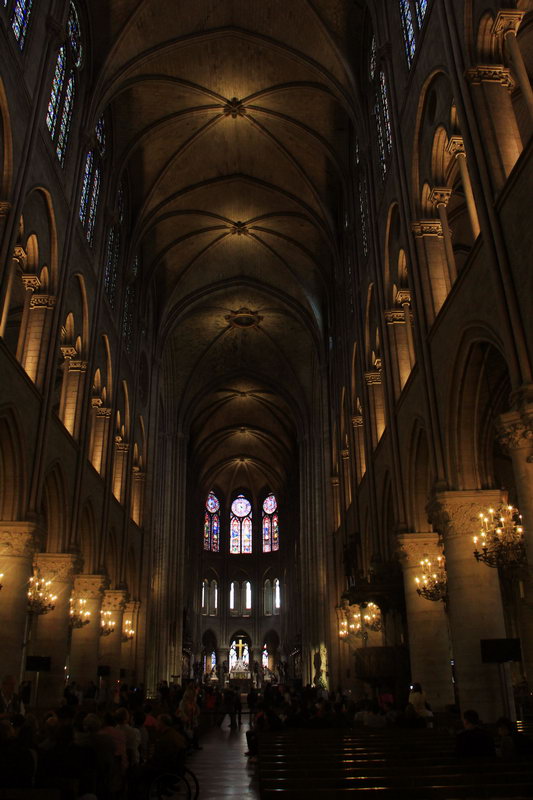 After Notre Dame we had a walk around the island Cité, reached the Sainte-Chapelle and through it came to the Palace of Justice, and went away to the mainland, namely the Pompidou center.

Making our way through the ancient streets of Paris, met with Saint-Jacques Tower. Saint-Jacques Tower - is a free-standing tower in the late Gothic style in the eponymous square in Paris, the former bell tower of the church of Saint-Jacques la Boucherie. The height of the bell tower is 52 meters. For sure, you can climb it, and certainly not for free :) 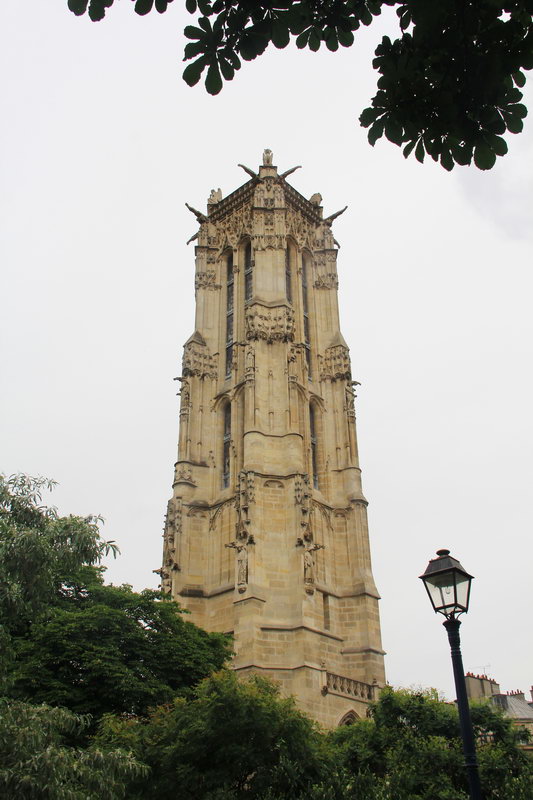 And now we are near the Pompidou Centre. National Center of Art and Culture Georges Pompidou - the people called it just Pompidou Centre - cultural center, located in Paris, in the Beaubourg quarter. The center is open by order of the president Georges Pompidou in 1977 to study and support of contemporary art of various areas (music, art, dance, etc.). The complex includes a museum of contemporary art, exhibition and concert halls, a rich library as well as the Institute for Research and Coordination of Acoustics and Music. 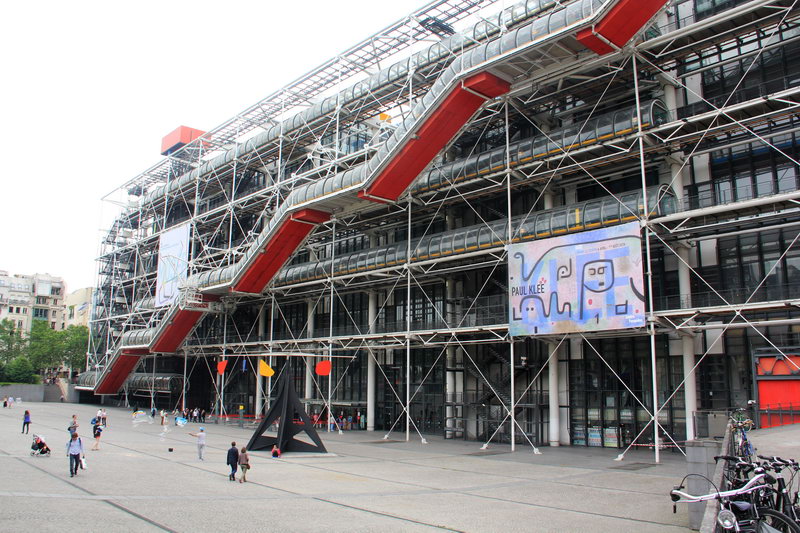 Right on the square in front of the Center there is an action - Modern Art - a woman lying on the floor wrapped in garbage bags and saying something through the microphone in French - so it's hard to understand it... 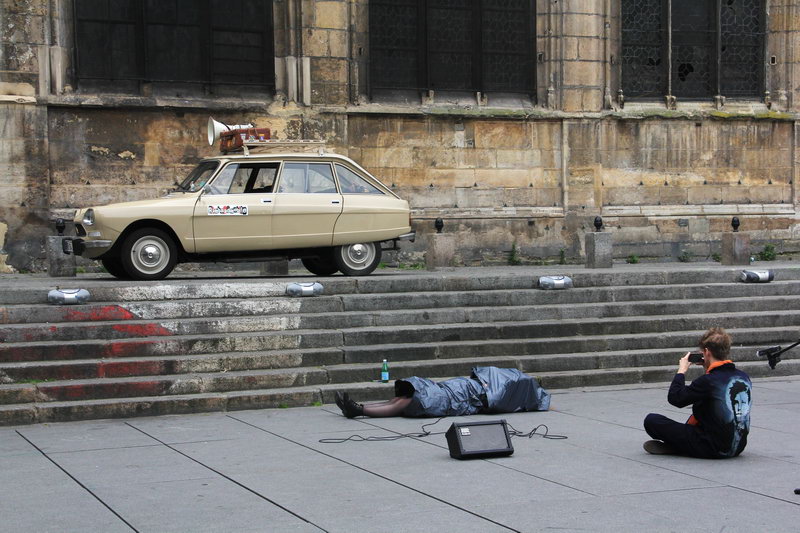 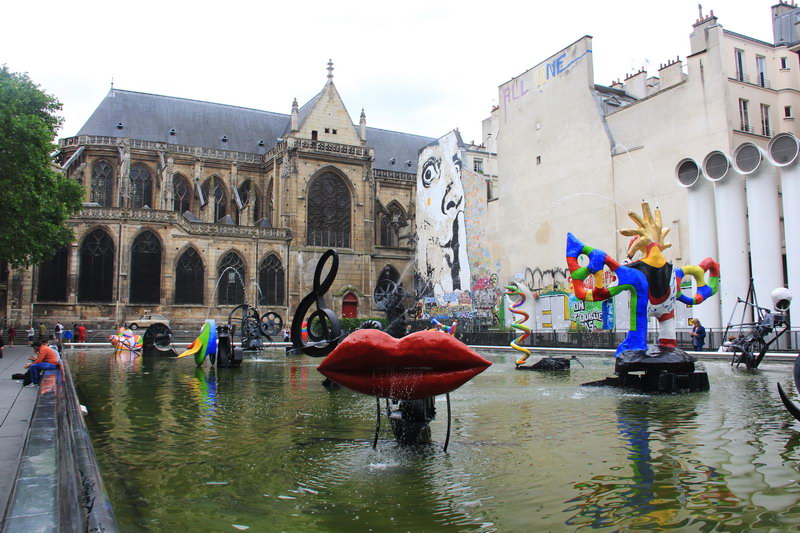 We did not go to the Pompidou Center like museum, but went only to the upper floors to the observation deck (entrance to the observation deck 3 euros, and in the center (exhibitions, etc.) 14 euros). Upstairs there is a restaurant with a great view and not very humane prices. You can also walk along the balcony of the building and see the view of the rooftops of Paris, and in the distance see the Eiffel Tower and Sacré Coeur.

The Pompidou Center is located very close to the Louvre. Now Louvre is closed because of the flood, but the yard you should visit.

And we went to the side of the Louvre, other interesting places of Paris you can see in the continuation of our walk Louvre, Place de la Concorde and Montmartre - one of the main attractions of Paris. 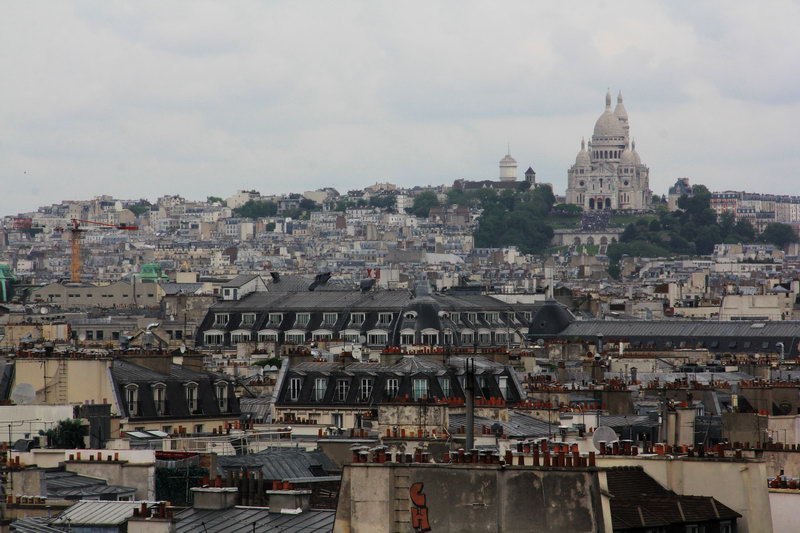